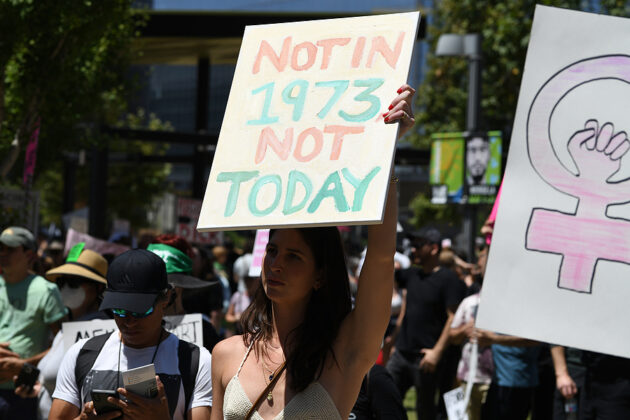 Following the historic overturning of Roe v. Wade by the U.S. Supreme Court on Friday, tech companies are adding new benefits that cover expenses for employees who need to travel to another state to get abortion care.

Meta, Microsoft, Smartsheet, and Twilio are among companies already tweaking their HR policies in response to the landmark decision eliminating the right to abortion.

“Our culture is rooted in respect and opportunity for all people, as such our employee insurance plan will continue to cover abortion as a medical procedure, and will now also reimburse travel costs incurred if an employee must travel out of their home state for a procedure,” a spokesperson for Seattle-area enterprise software giant Smartsheet said in a statement shared with GeekWire.

Microsoft previously covered abortion and gender-affirming care for employees and enrolled dependents. Its benefits have been “extended to include travel expense assistance for these and other lawful medical services where access to care is limited in availability in an employee’s home geographic region,” according to a statement shared with GeekWire.

Meta, which employs more than 7,000 in the Seattle region, issued a similar statement: “We intend to offer travel expense reimbursements, to the extent permitted by law, for employees who will need them to access out-of-state health care and reproductive services. We are in the process of assessing how best to do so given the legal complexities involved.”

RELATED: Commentary: Why this Seattle startup had to mess with Texas over healthcare

Earlier this year tech companies such as Amazon, Yelp and Glowforge already started to cover expenses in response to laws enacted in states that banned abortion procedures. Seattle real estate giant Zillow Group updated its health plan on June 1 to reimburse up to $7,500 “each time significant travel is necessary to access health care, including reproductive services or gender-affirming care.” Other corporations including Starbucks and JPMorgan Chase made similar moves.

“The savviest employers will cover this as extensively as possible,” Kiner said.

“Sometimes benefits can come with a stigma, and then people don’t use it,” she said. “It’s important to make sure people feel comfortable and confident to take advantage of this benefit in the same way that they would any other.”

Protecting the privacy of those seeking abortions is something tech companies may need to address not just for employees but their users, CNBC reported. Some legal experts say companies could be issued subpoenas for user search histories and data “that could be employed to prosecute abortion seekers, providers, and helpers,” the Electronic Frontier Foundation wrote in a post last month.

“They can also expect pressure to aggressively police the use of their services to provide information that may be classified in many states as facilitating a crime,” EFF wrote. “Whatever your position on reproductive rights, this is a frightening prospect for data privacy and online expression.”

Many tech leaders sounded off on the Supreme Court decision.

“This decision does not reflect the America I immigrated to,” Outreach CEO Manny Medina said in a statement. His company today extended benefits to cover travel expenses for healthcare. “As a founder and CEO, it is really hard to build a company based on a set of core values in an era where individuals’ rights are taken away,” he added.

“It is a dark day in our nation’s history,” Twilio CEO Jeff Lawson said in a LinkedIn post. “Stripping away this basic human right disproportionately impacts the most vulnerable women across the country. Both I and Twilio support every woman’s right to choose.”

The Guide to Telecoms Arbitrations